In the HOPE Cardgame players take a role of one of four surviving races, which combat for the last sources on the devastated planet Earth. Each race is unique and playable in different way. Thanks to it players can use different strategies in each game. More experienced players can try to build their own decks depending on favorite cards and preferred tactics.

Aliens are bloodthirsty race, which comes from the deepest underground and scares their enemies with their appearance. Aliens make heartless attacks for food and attack fortresses of people in subway and in ruins of towns and cities. They don’t know a fair fight, they attack in groups and don’t leave any witnesses. Create a band of many Aliens and feed them with fresh meat!

Special ability of aliens is NIGHTMARE, which reduce key attributes of opponent units in every combat in which they are involved – defense when attacking and attack when defending.

During the World War III, people experimented with dynamic artificial intelligence. The result was the emergence of the first robots with fully dynamic AI. Thanks to it robots able to live its own life and began to desire to annihilation of their creators. Bots are great specialists in the fight against superiority of opponents, because of their defensive abilities and are equipped with destructive weapons. Lead Bots and smash all enemies in the dust!

Special ability of bots is SENTINEL, which means that no more than two opponent units can attack them.

Humans represent apparently the weakest race, but they profit from the knowledge of terrain and cities. They found new homes in abandoned subway stations and nuclear shelters where they desperately defend every meter of underground basis, which are still declining. Join the people who struggle to survive and use their greatest strength – the fight from a distance!

Humans don’t have any special ability, but most of them has increased range (RANGED). Due to this fact they are able to attack up to 2 spaces instead of one adjacent space.

Mutants evolved from infected people and animals as the result of the infected planet Earth with nuclear fallout. While animal species are wild, there is also an intelligent sort of mutants. But their common desire and commitment is to infect all surviving creatures and draw them among themselves to stay sane. Stand on the side of mutants and infect all who breathe clean air!

Special ability of mutants is INFECT. They wound all adjacent opposing units at the start of each Battle phase.

Pre-defined decks in the HOPE Cardgame Core Set serve to familiarize with all the cards and differences between aliens, bots, humans and mutants. At the moment you gain enough experience, orientate in the game logic and learn how to properly use all the cards during the game, you can begin to build your own deck.

HOPE Cardgame story and game mechanics establishes certain rules you should follow to create a balanced deck. Units always refer to a specific race. To create a custom deck it is possible to choose either one or two friendly races (eg. Humans can be combined with Bots, or Mutants). All you can see in the Races diagram: 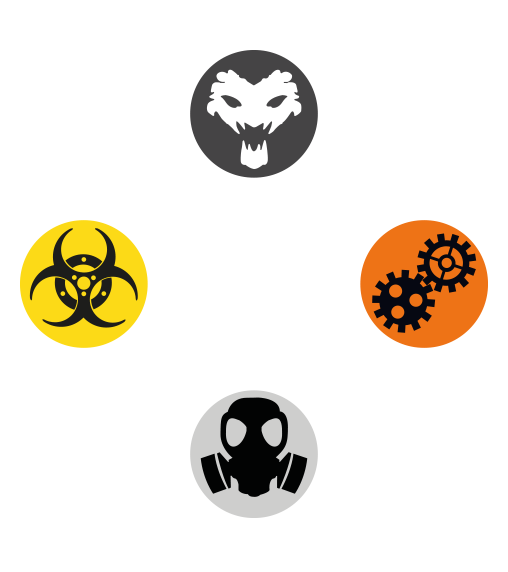 Locations and events are always neutral and can be used in a deck in connection with any races.

Each deck must include:

Recommendation for creating a deck: