It's the year 2070 and the World is slowly recovering from The World War III. The war, which fully ulneashed arming of nuclear weapons, research of artificial intelligence and desire for domination of the World by a few individuals. The deserted and almost uninhabitable Earth has been as the result of perfect destruction.

Surviving Humans are dependendent on living underground, where they have to occupy underground stations or nuclear shelters. They are forced to go on the inhospitable surface only for loot and need to replenish limited sources of occupied bases.

However, the undergound isn't safe place. They have to defy to Alien invasion, which is coming from the depths of The Earth. Aliens are always attacking with huge superiority and they don't leave any witnesses.

Formals industrial zones are occupied by Bots invented by army experiments during the war. Humans have given them artificial intelligence, which helped them in battles. Now, Bots are decided to kill everything.

The rest of surface is populated by Mutants - humans and animals malformed by radiation. They have managed to adapt the postwar circumstances of uninhabitable surface. The are trying to infect all being in their surroundings and turn them to members of their group.

However, they all are connected by deservation to clean The Earth from all enemies and gaining last resources, which are needed for survival. Only hte sources are the point for their battles – they are limited and they are also running out! The biggest battles are fought for them and they are the reason for ubiquitous and endless thefts. Who will win this neverending battle?

Take the destiny of The Earth in your hands and decide, who will dominate the devastated World!

Your army is represented by cards in your hand, the battlefield is a big game board where you clash with your opponent. Welcome to the card and board game HOPE Cardgame, a game full of unexpected turnovers, exciting moments and strategic decisions!

The goal is to be the first player who gets 30 sources and win the game. Sources are not just currency for playing cards and using effects, but they also indicate the number of lives for each player. Therefore player who lose all their sources, loses the game.

You should therefore consider whether to play a lot of units to be weakened or choose careful and progressive tactic of gaining sources. Sources are acquired by winning battles, destroying units, dominating on the battleground or by card abilities. You may wish to choose a destructive and quick strategy to conquer the enemy or concentrate on the overall superiority in the dominance.

During the game you will learn 144 playing cards included in the HOPE Cardgame Core set. In the Gallery you can take a closer look at some of them. All cards are divided into four decks according to individual races. In each deck you can find following three types of cards:

Units represent the player’s army that participates in battles against their opponent. They are either attacking or defending. Each hero is therefore labeled ATTACK, DEFENSE and VITALITY and also has special or passive abilities that increase their strength in the game.

Locations are buildings or places, explored by units on the game board. Locations help you to control large areas of the battleground, because they block opponent player. Locations also protect your units and give them special or passive abilities during the game.

No less important advantage is the possibility to play new units around locations and thus accelerate the move closer to opponent.

The last card type are events – onetime effects, which enter the game in different phases and thus affect progress of the game. These phases are defined by the flag on the card (MAIN, MOVE, COMBAT). In case that the flag is labeled ANYTIME it can by played in any phase of the round.

Where Does It Play? 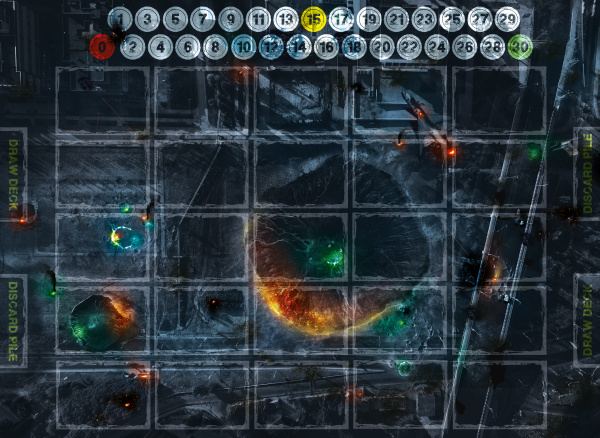 All important actions take place on the game board, consisting of 5 rows and 5 columns. The utmost row on both sides of the game board represents the home base for each player, where they can play their heroes – units on the battleground (Main). Units may strategically move across the battleground (Move) and occupy the territory – locations (Explore). In combats you need to take the right steps to dispose your enemies and try to reflect their attacks (Battle). Evaluating of the dominance is very important for obtaining sources and to build up the strategic position on the battlefield. (Dominance). At the end of each game round, you draw new cards and fill in your army with units, locations and events (Draw). Into the whole running enter onetime effects – events, which dramatically affect the strength of all heroes or the game line.

For more information, see How to Play.

It Doesn’t End With Game One on One!

In addition to variants „Game one on one“ you can also choose more strategic game mode „Artifact game“, whose aim is to gain an advantage of artifacts over opponent. Artifacts give positive or negative abilities to units, that affect their strength in the game.

By joining both game boards it is possible to play in cooperative gaming mode “Two on two game”, where two players of two teams can cooperate in combats for dominance and dominate the world. The team’s goal is to accumulate 40 sources as first.

Separate game board you can buy in our e-shop.